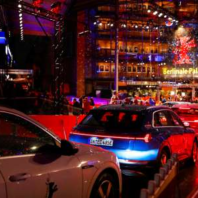 The 29 th of february with a value of €20,000, the Audi Short Film Award at the 70th Berlin International Film Festival goes to “Genius Loci” by Adrien Mérigeau. This year’s international short film jury is made up of the Hungarian animation film maker Réka Bucsi, the Turkish curator Fatma Çolakoğlu and the film maker Lemohang Jeremiah Mosese from Lesotho. The jury’s statement on this year’s award winner: “That other night her thoughts merged with the flickering street lights, the skyline and the trash on the sidewalks. This beautifully crafted film effortlessly coordinates the chaos of being human.”

In “Genius Loci“ Reine, a young loner, wanders around the city at night. There is chaos everywhere: in her head and outside, in the big city. Things are taking on a life of their own. Young Reine is on the search, but she does not know what she is looking for. In delicate drawings and fluid animations, we see the world through her eyes and her perception becomes tangible.

The Berlin International Film Festival awards the Audi Short Film Award in the Berlinale Shorts section. In addition to the Golden and the Silver Bears, this award is one of the most coveted awards at the 70th Berlin International Film Festival for short films. With a value of €20,000, the award is among the most valuable worldwide for short film prizes. “The short film is a defiant form, one that offers a particularly high level of artistic freedom. We are fascinated by this principle of short films as freedom plays an important role at Audi as well – particularly when it comes to innovations for the future of mobility,” says Hubert Link, Head of Marketing Germany at AUDI AG.

A total of 24 films from 18 countries, curated by the new Head of Berlinale Shorts, Anna Henckel-Donnersmarck, were evaluated by the International Short Film Jury, consisting of Réka Bucsi (Hungary), Fatma Çolakoğlu (Turkey) and Lemohang Jeremiah Mosese (Lesotho). “United in a desire for freedom and innovation, Audi and the short film form an ideal alliance in the Berlinale Shorts competition,” says Anna Henckel-Donnersmarck. Different works that received the Audi Short Film Award in previous years formed part of the Berlinale Open House Program 2020. These included “Planet ∑” by Momoko Seto (2015), “Solar Walk” by Réka Bucsi (2018) and “Rise” by Bárbara Wagner and Benjamin de Burca (2019), which once again exhibited their power in an unusual setting.

In the public, free-of-charge cultural program Berlinale Open House, Audi showcased additional wide-ranging discussions, interviews, workshops and concerts together with the Berlinale. “The Audi Berlinale Lounge is a place for exchanging ideas on a wide range of topics and an important festival meeting point, directly beside the Berlinale Palast with an excellent view of the red carpet,” says Mariette Rissenbeek, the new Executive Director of the Berlin International Film Festival. Almost 15,000 guests attended the program events in the Audi Berlinale Lounge. Among them were Zeit Online editor Matthias Kalle as well as Birgit Heidsiek from Green Film Shooting and outstanding artists such as Leopold. The Audi Denkwerkstatt Berlin, together with Martin Eyerer, CIO Factory Berlin, and other pioneering thinkers, focused on the further development of prototypes in film and mobility. The issue of sustainability was presented by the UN climate ambassador and Audi formula E race driver Lucas di Grassi and discussed with the public. In addition, the Berlinale Lounge Nights provided the perfect way to round off the event-filled days at the festival.