Martin Goosh is a director, writer and filmmaker . He has been in the Sitges Festival de Cinema Fantàstic de Catalunya 2018 to present his movie “Black Flowers “, an apocalyptic thiller. The World Premiere was in the Retiro´s cinema in Sitges, and 450 people attended it .

MV- Martin you did the World Premiere of ” Black Flowers”in the Sitges Film Festival 2018 and, it was your first time in this festival . Can you tell me, how was your experience and, how did you see the audience´s answer ?
MG- I first came to the Sitges Film Festival in 2015 as a film fan and thought it was such a great festival I had to have my next movie have it’s world premiere here! it took a couple of years but I did it!
It was a good experience and it is great to show the film to a full house – I don’t think there was a single spare seat! The audience are very vocal and shout and cheer every time there is any blood or violence – it’s very amusing. 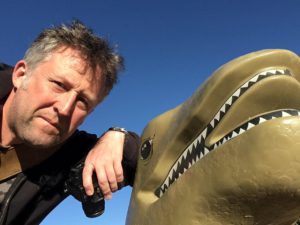 MV- What´s the movie about ?
MG-The movie is a strong female led drama about a mothers fight for her family and survival in a dystopian post apocalyptic world. It’s also about how we as a race need to work together in order to survive as a species.
MV- You have worked with all the genres , but as I see, you shooted more with science fiction . Maybe do you feel more attracted for this genre ?
MG-Before I became a director I spent 15 years in the camera department on films such as Judeg Dredd, Harry Potter, James Bond and even The Muppets. For me it is much more fun to be working on a film that is also creating a whole new world. I see horrible things happening on the new and on twitter every day – do I need to spend my time making films about them? I do not. Especially when I could be making escapism and making the world a more interesting and happy place.
MV- You make independent movies, I guess, it is not easy and, very difficult to rise money to do that ….
MG – You would not believe. Every $ raised is a battle. I would love to work for a studio or production company where I could just concentrate on the directing and the writing, but until then I have to be involved in the finance.
MV-Which was the movie that captive you ?
MG -As a child there were many films that influenced me and made me want to become a filmmaker including most of Terry Gilliam’s films, the Monty Python team, Raiders of the Lost Ark, Dragon Slayer and Das Boot which had an incredible effect on me.
MV- In Black Flowers ,you worked with Jesus Lloveras , an actor from Barcelona . He played in lot of spanish movies but, never in an english film. Can you tell me , how did you meet each other, and , why did you decide to work with him ? ( little bit about the work togehter ).
MG -Jesus and I were both judges at the Santa Barbara International Film Festival and we got on very well. I watched his showreel and thought he was a great actor, and when I started my film I thought how great it would be to have a Spanish actor involved and gave Jesus a call! He has a great look and has the ability to go from happy to nasty very quickly. He was great as Joe and on set he is very willing to ‘muck in; and help us get things done, which on a low budget set is vital. I am sure we will work together again in the future.
MV- In the future , have you considered to shoot a film in Spain ?
MG- Interestingly we just had a meeting with the Mallorca Film Commission, so you never know. I would love to film in Spain, but of course, sadly, it is all about the money. 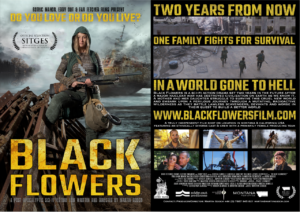 MV- Let´s talk about leisure . Wich is your favourite place to get lost in Spain ?
MG- Well I have only been to a few place – but I loved the castle Alcazar of Segovia which is just spectacular. I of course love Sitges and Barcelona, but also the Roman history at egovia is brilliant and very inspiring.
MV-Are you a good cooker ?
MG- Yes I am. Many years ago I shared a house in Sydney Australia with an
Indian Chef and he taught me how to cook a lot of Indian dishes. I like to cook, but only really cook fresh produce.I cook most days even if it is just something simple.
MV- Wich is your favourite mediterranean dish ?
I do like a kebab. Is that Mediterranean??
MV- How do you see the new talent in Great Britain ( actors ) ?
MG-As I am an active filmmaker and go to a lot of festivals I have never
had any trouble meeting new actors and actresses. Enthusiasm is incredibly important . I want to be on set with actors who want to be there and not just actors who want the money.
MV-Last question, changing subject…How do you think is going to affect the Brexit in the film industry ?
MG-Brexit is bad for the film industry and every single report confirms this.
Film are supposed to build cultural bridges and cross borders. We are trying to make films more diverse then at the same time our Government is pursuing Brexit which creates boarders, tears down bridges and halts diversity.
It’s a very sorry sate of affairs.
MV- Many thanks Martin, congratulations for your movie, and wishing you all the best.
Text : Meritxell Vallvé   Photos provided by : Martin Goosh