31 octubre, 2018EntrevistasComentarios: 0meritxell vallve
1- What represents for you to receive La Màquina del Temps award?
I think it’s the culmination of the varied movies I have taken up in my career.  I’ve always been a little edgy, a little out there and a little fantastic.  It was such an honour to receive The Time Machine Award at Sitges.  I’ve had the opportunity to receive “The Best Actress Award” from my film that I had produced called Dream Home.  I’m very pleased to be invited and so surprised to receive this Time Machine Award.  I was so touched!!!! 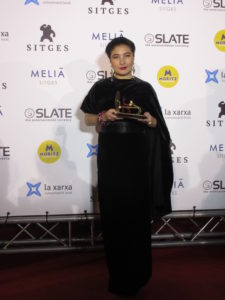 2- You have been a jury member in Sitges Film Festival 2018, I guess,  is not easy to answer but which movie has caught your attention?
Haha…..that is such a trick question.  Every film has made me learn tons and tons of film knowledge.  I guess “Aterrados ” was very scary and “The Mermaid”. Climax just shock the hell of out of me, it was a masterpiece.  But there were too many excellent film that I can’t say it all here.  You should watch all of them too!
3- You have been years before in this festival .What do you thing about this Sitges 2018?
Honestly, it was my first time really getting to go to Sitges this year, I really love the atmosphere there.  I feel the fans fervor.  The effort of the whole festival was 24/7 nonstop.  I’m so impressed and motivated by it.  It makes me want to make a film now!
4 – and, what is your opinion about the winning  films Climax and Lazzaro Feliz ?
Climax, in my opinion is a total hands down!  Unconventional and brilliantly shocking just like Gasper Noe.  Lazzaro Felice is a moving piece that shows me humanity.  I learned so much about the tobacco farmer’s situation in Europe.  It’s a humanity epic piece.
5- The honkones cinema has grown a lot, how do you see it and, if there are some lacks?
I think Hong Kong is booming with master class directors and they are also nurturing a lot of wonderful new directors like Johnny To’s organization New Wave competition which is the best place to find good new directors. 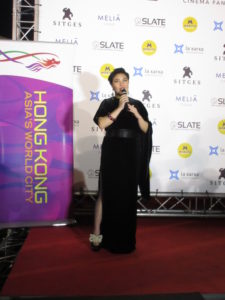 6- How do you see the new promises of the honkones and Hollywood cinema?
I think with a Fantastic theme it will always be promising.  Audiences love to be shocked and surprised.  Well, that’s what I thought too.
7- Would you like to work in a Spanish movie?
Oh yeah!
7- Can you tell me , some director’s name that you can highlight?
Well, I’ve worked with Gonzalo López-Gallego in” Open Grave”.  It’s was very sensuous.  If I have to name who I would die to work with, I think you know the names already.  Pedro Almodóvar, Guillermo del Toro….
8- You played in Lucky Days. Roger Avary wanted to have in the movie the characters´s spirit of  ” True Romance”  and ” Pulp fiction” . Do you thing that he achieved?
I think that we have a wonderful and friendly cast, I’m sure he achieved it.  I did a small and interesting cameo.  All I can say is that I did something that I had never done before.  So hopefully, it’s surprising for you.
9- How was working with the cast of characters and with Mister Roger Avary? I remember interviewing him in the Sitges Film Festival … that was a long time ago . He is a very nice and funny gentelman.
It’s was hilarious!  I can’t wait for the film to come out.  Everyone was having so much fun on the set.  I couldn’t believe Roger almost conned my assistant into playing a role.
10- When you were a little girl, did you like the horror movies ?
I love horror, but I am one of those who used my backpack to cover my eyes as I peeked.
Many thanks Mrs Ho for the interview and , hope we will meet again , maybe in Sitges Film Festival 2019 ….
Text and photos :  Meritxell Vallvé